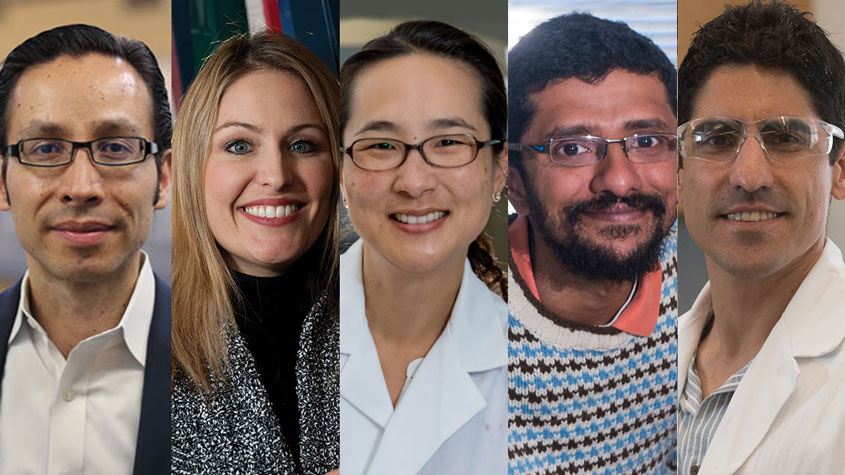 Five faculty members in the George R. Brown School of Engineering at Rice University have been promoted to full professor, effective July 1, 2020.

Promoted from the rank of associate professor are:

Leonardo Dueñas-Osorio, civil and environmental engineering (CEE), earned his Ph.D. in CEE from Georgia Tech in 2005. The following year he joined the Rice faculty. His research focuses on developing methods to measure and predict the effects infrastructure systems have on each other during normal operation and such extreme events as earthquakes and hurricanes. He is an associate member of the American Society of Civil Engineers, Association for Computing Machinery and Society for Industrial and Applied Mathematics. His research has been funded by the National Science Foundation, Department of Defense, National Institute of Standards and Technology and the City of Houston. He received an NSF CAREER Award in 2008 and the Early Achievement Research Award from the International Association for Structural Safety and Reliability in 2017.

Jamie Padgett, CEE, earned her Ph.D. in civil engineering from Georgia Tech in 2007 and joined the Rice faculty that year. Her research focuses on risk assessment of structures and infrastructure exposed to multiple hazards, such as hurricanes, floods and earthquakes. She serves on the leadership of national and regional research centers that advance resilience modeling for infrastructure and their surrounding communities. She was recently named a Fellow of the Structural Engineering Institute of the ASCE and was founding chair of its technical committee on Multiple Hazard Mitigation. In 2011 she won an NSF CAREER Award.

Junghae Suh, bioengineering, earned her Ph.D. in biomedical engineering from Johns Hopkins University in 2004. She was a postdoctoral fellow with the Laboratory of Genetics at the Salk Institute for Biological Studies, before joining the Rice faculty in 2007. She specializes in designing gene-delivery vectors for applications in biomedicine. Her Synthetic Virology Laboratory combines protein engineering and molecular/cell biology to engineer the properties of naturally occurring viruses for the he treatment of debilitating human diseases. In 2016 she won the American Society of Gene and Cell Therapy Outstanding New Investigator Award and in 2010 the NSF CAREER Award.

Ashok Veeraraghavan, electrical and computer engineering (ECE), earned his Ph.D. in ECE from the University of Maryland in 2008 and joined the Rice faculty in 2010. He is co-developer of FlatCam, a thin sensor chip that replaces lenses in traditional cameras, and part of the team that developed FlatScope, a light-weight microscope that can image large fields of view at high resolution. He is a member of NSF Expeditions in Computing, devoted to seeing through skin; the DARPA REVEAL program on seeing around corners; the DARPA Neural Engineering System Design program to build implantable microscopes for the brain; the DARPA N3 program on imaging through the skull. In 2017 he received an NSF CAREER Award.

Rafael Verduzco, chemical and biomolecular engineering, earned his B.S from Rice in 2001 and Ph.D. from the California Institute of Technology in 2007, both in chemical engineering. He was a postdoctoral associate at the Center for Nanophase Materials Sciences at the Oak Ridge National Laboratory before joining the Rice faculty in 2009. He was awarded an NSF CAREER award in 2013 for the development of novel polymer-based solar cells. He has led the development of soft robotic materials based on liquid crystal materials and organized the 2017 International Liquid Crystals Elastomers Conference held at Rice. He is a thrust leader of the Nano-Enabled Water Treatment (NEWT) Engineering Research Center at Rice, and his group has developed ion-selective technologies for water treatment. He served as chair of the first Gordon Conference on Bioelectronics, and his group has developed conductive polymeric materials that can be used as interfacial layers for microbial bioelectronic devices.